The joy that comes with Menswear Fashion Week is always phenomenal. Hot stunning men strapping the Runway In sophisticated outfits. Just grab a glass of champagne, Your Phone and enjoy the show in full view. Yes! That’s what it’s all about mens fashion week. It gets hotter than what is seen or perceived But over the years, it has taken a new trend of just being a wearable fashion show into more diverse and creative event.

As a Fashion enthusiast, I wear what suits my body type and irrespective of how stereotype or traditionally accepted as feminine. There are times you don’t want to wear suit or kaftan just to look official. Make a Switch or fuvk it up!

To be an androgynous metrosexual, You must be bold

Designers are rethinking the concept of Women walking into a man’s closet and Wearing anything fashionable out of it. Men style could be boring and show less diversity in style. This concept has been adopted by some fashion brands in creating most stylish men’s wear lately. Men fashion is becoming bolder and bolder as it grows. Androgynous .To be a Cross Dresser. BIG fashion brands in Africa are latching on to this concept. Just months ago, the female romper became a thing in the world of men’s wear again.

Can we have a sound argument without mentioning  (Deuteronomy 22:5)”A woman must not put on men’s clothing, and a man must not wear women’s clothing. Anyone who does this is detestable in the sight of the LORD your God.

By mere existence, mens fashion weeks prove there are strong and growing menswear markets. At the just ended Men’s Fashion Week across the world, was no exceptional of Men wearing women inspired Clothing on the Ramp. While other designers played safe with the normal suit and kaftan for men or what is largely accepted as Menswear, others were more open to extending their creativity to androgynous Style. Redefining 21st century men as androgynous.   This created an intense drama and fixed eyes stare from the audience as the models Werk the Ramp.

Although most of the looks on the Runway could be Restyled, Some of them were just over the top. Well, it could either be for making a statement and not necessarily a wearable garment.Even though androgyny Fashion At Men Fashion Week has appeared year after year as a major style influence, it has been slow to trickle down to mass production due to either its less patronage or cultural and stereotypical critics. 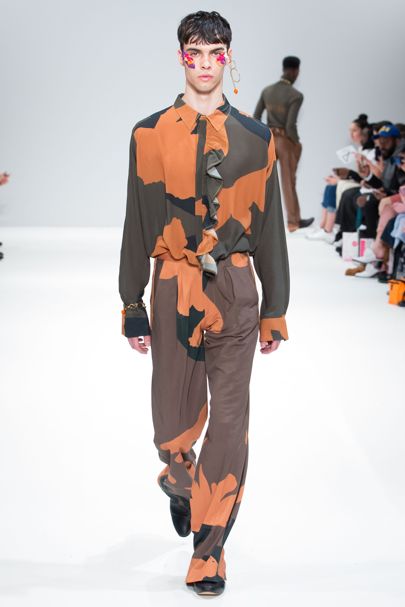 Today, if Your Girlfriend’s denim Jeans or wrap looks good, just go for it!Interestingly, you might be setting a new fashion trend.

What is your opinion on men wearing women inspired clothing?